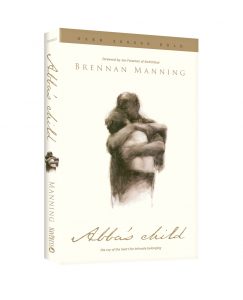 I read Ragamuffin Gospel about 15 years ago and haven’t read anything by Brennan Manning since. In the meantime, about ten years ago or so, he spoke at a Covenant Gathering called Midwinter. I remember he had all of us close our eyes and think about our earthly fathers. I don’t remember what he said or did, but it was very powerful and healing for a lot of people who didn’t have a good relationship with their father. I picked up Abba’s Child recently because a woman who I have been mentoring for ordination chose it from a list of books I gave her. It has been a great read. I love Manning’s honesty and authenticity. He has a way of expressing the inner turmoil inside us that can be what he calls an “impostor” and our true self, the one who knows he or she is Abba’s Child, fighting to take over. I could quote a thousand passages from this book – it is rich in depth, metaphors, profound thoughts and healing messages. But I’ll leave you with a few that I think kind of summarize the main points for me. The first is Manning quoting a different author, William Shannon:

“A false and illusory notion of God… sees God as someone who is gracious to me when I am good, but who punishes me when I am bad. This is a typical patriarchal notion of God. He is the God of Noah who sees people deep in sin, repents that He made them and resolves to destroy them. He is the God of the desert who sends snakes to bite his people because they murmured against Him. He is the God of David who practically decimates a people, because their king, motivated by pride perhaps, takes up a census of his empire. He is the God who exacts the last drop of blood from his Son, so that his just anger, evoked by sin, may be appeased. This God whose moods alternate between graciousness and fierce anger, a god who is still all too familiar to many Christians – is a caricature of the true God. This God does not exist. This is not the God whom Jesus reveals to us. This is not the God whom Jesus called ‘Abba.'”

Ooh, this is so good! I hadn’t read this before, but it captures how so many people falsely see God. It’s as if we are naturally inclined to see God as a killjoy and dictator. My question after this quote is, “Then, does God change between the Old Testament and the New Testament?” Of course not! When we read the Old Testament, if we don’t read it through the eyes, compassion, life, death and resurrection of Jesus Christ, we are missing the point and creating a false view of a god who doesn’t exist.

The other quote is similar in that it isn’t Manning himself, but he’s quoting Henri Nouwen:
“Christian leaders cannot simply be persons who have well-informed opinions about the burning issues of our time. Their leadership must be rooted in the permanent, intimate relationship with the incarnate Word, Jesus, and they need to find there the source for their words, advice, and guidance… Dealing with burning issues easily leads to divisiveness because, before we know it, our sense of self is caught up in our opinion of a given subject. But when we are securely rooted in the personal intimacy with the source of life, it will be possible to remain flexible but not relativistic, convinced without being rigid, willing to confront without being offensive, gentle and forgiving without being soft, and true witnesses without being manipulative.”

Yes! “Our sense of self is caught up in our opinion of a given subject.” I don’t know about you, but this makes me think of the political situation in Brazil, the UK, the U.S., France. How can we find our sense of rootedness in the One who created us and not in the way we feel about the person who just cut us off or treated us badly at the ice cream shop or didn’t notice our new haircut or… or… or…? It seems my identity has been weaker than usual since I moved to France. I see that I am offended easily, have very little patience, and just have some running anxiety going within me most days. When I catch these things, I call or text someone I trust to say what I’m feeling, read an article on people who are easily offended, think about what I’m putting my identity in, pray, go to the gym, or just stop and have a cup of tea, breathe deeply and try to re-center myself in the One who knows me and loves me as I am.