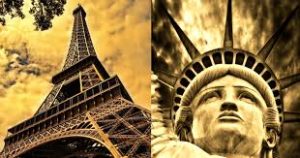 A couple blog posts ago, you’ll find the first part of this book review. I finished the book and finally have time to reflect on it!

1) Le couple – Couples
The author talks about the different values that French and American couples have. For instance, she says French couples are not afraid to have small fights in public. They think the American couple that never fights in front of others is kind of fake and that there must be something wrong. French couples can tease each other, there’s physical space between them, they show an individuality that is perhaps more pronounced than in an American couple, and the greatest value is to be loved just as you are, with warts and all. They can be turned off by the “sappiness” they might witness in an American couple. From the author’s observations, an American couple values support above else. Therefore, an American couple will encourage each other to be the “best they can be”, to pursue their dreams and aspirations, and an American spouse is more likely to take the other’s side in support, rather than challenge him or her to think about it a different way. I find it interesting that she wrote the same thing about friendship… French friends are more likely to challenge each other and dispute about matters, knowing that their friendship can withstand it, while American friends choose to support one another even if they don’t necessarily agree with what the friend is doing. (Of course, this all depends, but these are the generalizations). 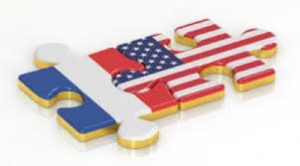 As said before, it seems American friends value encourage and support while French friends value truth even if it hurts. For Americans, friendship is a precious good, a treasure. There are different levels (buddy, pal, roommate, housemate, close friend, very close friend, family friend, old friend, new friend, best friend, co-worker, girlfriend, boyfriend, etc). Americans have a sense that friendship/love can’t be spread too thin. So, they look for people who are worthy of this treasure, and then, no matter how strong the friendship becomes, they keep a certain element of fragility. If the other person doesn’t “deserve the treasure”, Americans will say, “I misplaced my trust.”
It seems French people have a different view. It takes much longer to build a friendship, but once it’s there, it’s not easily broken. Americans may have a friendship that’s “closed” while French friendships are “open”. That means that there is a desire to meet one another’s friends in France. You talk about your other friends with your French friends and then you introduce them to each other. The reason is because there’s an assumption that if you like them and they like you, and we like you, then we’ll like them, too. French people will tease each other saying, “Why haven’t we met this friend of yours yet? Are you going to hide her/him from us forever? You sure you didn’t just make this up? Are you ashamed?” The end of the chapter, the author says there is a stronger sense of “loner” in American culture. Whereas a loner (someone without friends) in France might be considered asocial (just not interested in being around others), the same type of person might be considered antisocial (has behaviors that harm or lack consideration for others) in the U.S.

3) Le téléphone – The telephone
This chapter is quite out of date now with smartphones and internet, etc. but the most interesting part for me was that when phones became very popular in France, French culture considered it an annoyance. They didn’t want to be bothered by people calling all the time. They didn’t want incessant conversations and questions. Americans seemed to enjoy the phone and using it as a tool to connect to others, whereas in French culture, it was better to go to the store in person and ask the question, or wait until you saw the person again. The “call me anytime” culture of the U.S. was not found in France. The author concludes that the phone was used more as a tool in France and much less as a pleasure (compared to in the U.S.).

4) Le “petit” accident – The “little” accident
This chapter is just fascinating! What happens when a friend is at your place and he or she breaks something of yours? Are you quick to loan out your car, your clothes, your tools, your kitchen utensils, etc? Well, according to the author, French people are less likely to lend items unless they don’t really care if they get broken or not. It’s surprising for French people when they’re at an American’s home and a guest spills a bottle of wine or breaks something. The immediate reaction of the American is to run and do everything they can to clean it up, or to get the exact details to replace the broken item. In French culture, the friendship doesn’t depend on these acts of “making it right”. It’s more common to see something broken and it’s the host who says, “Don’t worry about it”. French culture might be more likely to make a joke… “Oh, sorry, I had a little accident. But whose idea was it to put the vase on the edge of the table anyway?! Ha, ha, ha.” And everyone laughs. As I read this chapter, I thought of my African friends and how “things” are just not as big of a deal. There’s a sense that “what’s yours is mine and what’s mine is yours”, so when something is borrowed and broken, it’s just not that important to replace it. At the very end of the book, the author very lightly makes a comparison between French culture and that of African-Americans. She said she doesn’t have enough data to support it, but all of her conversations with African-Americans made her think, “Wow, this culture is much more like French culture than anglo-saxan America.”

5) Se renseigner – Getting information
This was another very interesting chapter because the differences are stark. And I’ve experienced some of them! It basically says that French people go into a store in the U.S. and ask a question and then feel bombarded by the response because the American way is to explain all the options and allow the client to choose. French people prefer (in general) to come with all the details of their need and just have a simple answer. Too much information makes them frustrated or even confused. I’ve observed this in Annecy. When someone asks you for directions, it’s more culturally appropriate to just send them part of the way and then say, “And ask someone when you get there.” When we go to fill out official papers, it is very common to be given a list that you have to bring in. Then, you bring that list in and you’re told what you’re missing. So, we go back to the city hall or immigration office multiple times. The same happened at Sophia’s school. There had been a list of supplies given out at the beginning, but they forgot to give it to us since we came the second week of school. I asked fairly early, but they kept forgetting to give it to me, so each week, I would find out more what was missing. I brought tissues and then saw a list of kids who were supposed to bring in binders. So I brought in a binder and Sophia got dirty one day… needing to change pants. It wasn’t until that day that they said I should bring in an extra pair of clothes, etc.
As we’ve been looking for an apartment, we first tried to share a lot of our details to give the people a sense of who we are. But when I shared this with my French professor, she said, “Give less information. This is too much.”
There’s a story about the phrase “You shouldn’t have.” A French person was supposed to bring bread to an American party, but had trouble finding the right kind, so went to several stores and was late to the party. When he arrived, the hostess said, “Oh you shouldn’t have.” He thought this literally meant he shouldn’t have and was a bit offended thinking she’d be more grateful for his efforts. But the phrase “You shouldn’t have” in English is actually a way to say thank you! It’s in no way trying to minimize the other person’s efforts. It means, “You went through all that, caused yourself so much discomfort, and you showed the importance of our relationship. That means a lot.”

6) Conclusion (same in English, but of course, pronounced differently) 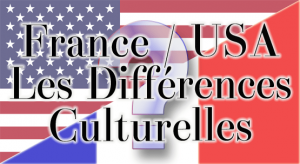 “This is only the beginning, so why do I stop writing here?” asks the author. Because this book is only supposed to be an opening. It’s to trigger the thought process and analysis of cultural differences, in the effort to close the gap between cultural misunderstandings between French and Americans. She goes on to discuss the huge differences between the ways the two cultures view money. French people can think that Americans care way too much about money, talk about it a lot, brag about how much they make, or how much they spent on this car or that house or this piece of clothing. Her conclusion is that Americans are trying to show the accessibility of money and the American dream. They’re essentially saying, “If I can do it coming from poverty and nothing, then you can, too!” She finds a comparison between the way Americans talk about money and the way French people talk about seduction (which has no negative meaning in French). Seduction is an art for French people. It’s a way to attract others, it is not simply dependent on “being beautiful”, but it is how one speaks, acts, walks, and interacts with others. While to English speakers, the word “seduction” contains manipulative nuances, in French, once again, it is an art and seen as part of the culture perhaps as money is in the U.S.
Americans tend to plan ahead more and make commitments in ways that are surprising to French people. If French people are invited to something, they might say yes, but then if something comes up that is more important, they’re more likely to cancel, offending the Americans who have counted on them coming. The author shares stories where French people are confused, not realizing their agreement to come was supposed to be so “set in stone”.
“This book, that I finish with these phrases, is itself a cultural text to be analyzed.”

What are some cultural misunderstandings that you’ve experienced? Were you able to learn more and find out the “why” behind them? So often I find there is an explanation for almost everything that offends me from another culture… part of the “fun” of living in other cultures and having international friends is trying to be a bit of a detective and find out which cultural value the person is acting from. It forces me to look at myself a little deeper and ask myself why I do the things I do… which cultural value am I acting from?