C.S. Lewis and Oxford – From a religious experience to a genuine spirituality based on Jesus’ teachings 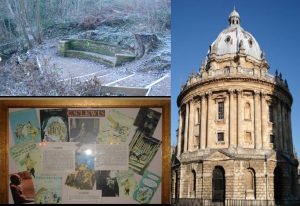 When I was living in Spain, I visited England many times, but never had the chance to go to Oxford. I was waiting for such an opportunity when all of a sudden… it came!
I was on my way from Bristol to Cambridge and stopped in Oxford. You may ask, “Fábio, why did you want to go to Oxford?”

First of all, the well-known Oxford University is the oldest University in the English-speaking world. I wanted to walk around its campus and old buildings…

The second reason I planned a trip to Oxford was to follow the footrints of one of the most well known and best writers of all times, C.S. Lewis.

Clive Staples Lewis was born on November 29, 1898, in Belfast, Northern Ireland. He had a religious background, raised as a Protestant. In 1908, his mother, Flora Lewis died from cancer.

In spite of Lewis’ traumatic religious experience, he had a spiritual hunger. So then, Lewis started reading Mathew, Mark, Luke and John to figure out who Jesus is. Who is this man? It was Lewis’ main question as he looked at the four gospels as historical documents to understand the most controversial, but also the most fascinating, person who has ever lived on earth.

It is actually a question that everyone should answer – no matter your cultural background, language, or civilization, if you live in the twenty-first century or not, anyone at any time in history needs to ponder the question, “Who is Jesus?” 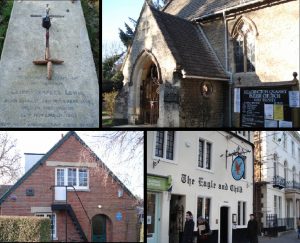 After Lewis finished the four gospels, he came to a conclusion – it’s what we read below from his book, Mere Christianity.

“I am trying here to prevent anyone saying the really foolish thing that people often say about Him: I’m ready to accept Jesus as a great moral teacher, but I don’t accept his claim to be God. That is the one thing we must not say. A man who was merely a man and said the sort of things Jesus said would not be a great moral teacher. He would either be a lunatic — on the level with the man who says he is a poached egg — or else he would be the Devil of Hell. You must make your choice. Either this man was, and is, the Son of God, or else a madman or something worse. You can shut him up for a fool, you can spit at him and kill him as a demon or you can fall at his feet and call him Lord and God, but let us not come with any patronizing nonsense about his being a great human teacher. He has not left that open to us. He did not intend to.”

To make a long story short, Lewis converted. He went from a religious experience to a genuine conversion, from long-held atheism to a belief in God. In 1929, Lewis knelt down to pray for the first time since he was a child. Lewis was not yet a Christian; but he was a theist. At that point, Lewis wrote the book, Surprised by Joy and became a follower of Jesus Christ.

C.S. Lewis was a member of a small group that was called “The Inklings.” They met at the Eagle and Child Pub on St. Giles Street in Oxford. It is a nice pub and I ate there once, enjoying the pictures of Lewis and his friend, J.R.R. Tolkien, on the wall. They discussed literature, writing, religion and life together while at the pub.

Later on, Lewis would meet the one who became his wife, a journalist from New York. Her name was Joy!

Well, they ended up getting married, but many might not know that after awhile, Joy got cancer. Once again Lewis prayed and prayed and prayed for her. However, Joy, his Joy, passed away. At that exact season, he wrote The Problem of Pain.

His Joy passed away, but his joy was not based on a religious-church culture experience anymore. Although his heart was broken and he missed his wife Joy, his experience with the teachings and the person of Jesus changed his life in such a profound way, he has never been the same.

Lewis’ spiritual experience was based on the principles of the One who lived his life, death and resurrection in a way that brought undeniable implications for every single human being in the past, present and future in the course of history.

With that in mind, I look at my own life. I remember every place in Oxford related to Lewis that I had the chance to see: his home, garden and bench where he wrote some of his books, Holy Trinity Church in Headington Quarry where he attended and where he is buried, and the Eagle and Child Pub. I keep reading the four gospels and I’m learning how to respond to life as I face good moments and unexpected moments. I look at how I read life and which lens I use in order to discern whatever surrounds me. I am given the chance to choose between a religious experience and an authentic and sincere spirituality based on the simplicity of Jesus’ teachings as revealed in the gospels.